A quick note here, these reviews are primarily for DARK CANVAS which was the original published title for my series that was then referred to as the DARK CANVAS SERIES. In an effort to expand and improve my marketing the covers and titles of the series were changed. DARK CANVAS is now A Brush with Death. The stories, however, are identical, therefore all of these reviews are relevant. Enjoy!

A sense of expectation pervades whenever we begin reading a new book by a favorite author. Ah, but what happens when a friend offers an unknown book and says, “Read this?”

Expectation turns to mystery when given that opportunity to try a new author. Will it be a book that takes several chapters to work its way under our skin? Or can this author perhaps grab readers by the figurative throat, daring them to just put the book down and walk away?

Jody Summers’ “Dark Canvas” is one of those grabbers. His book is another that a reader may pick up at bedtime, intending to read a couple chapters before going to sleep, only to look at his watch hours later and wonder how all those minutes disappeared. Well-written novels, no matter the genre, keep me turning pages. But I admit that — perhaps a carryover from youthful preferences — I still enjoy a scary story.

To his credit, Summers’ “Dark Canvas” develops into a spooky romance that I liked even more when I was certain I had the ending pegged, only to find the author throwing me for another unexpected loop.

The book centers on an artist who opens a new business called “Canvas of Life,” a clever name born of the fact that she offers to complete a commissioned painting after mixing her paints with the (cremated) ashes of someone close to her client. Think about it, she says. Instead of looking at that creepy urn on the fireplace mantle, those ashes instead could contribute to the creation of fine art on the wall.

Summers’ primary characters include Kira McGovern, gorgeous, a former fashion model who has given up the runway to pursue a more gratifying and anonymous career — and Sean Easton, who grew up in rural Kansas and initially appears as naive as Kira is worldly.

Kira’s not purposely morbid. Upon using her mother’s ashes and quickly painting a scene that personalized her mom’s life in a touching way, she creates “Canvas of Life” to share that uplifting experience with mourning strangers. Slowly, however, the reader begins to realize, even before the artist, that working with such “cremains,” if you will, bonds Kira with the deceased. Images that she connects with, via visions and dreams, are at first gratifying, or simply mysterious.

But the author provides a sense of foreboding, a hint that the artist hasn’t a clue which doors she might be opening every time she pours a bit more ash onto her palette. This is no take-off on Oscar Wilde’s “The Picture of Dorian Gray.” Kira is not painting portraits. Changes in those would be more easily noted.

Still, she says, the process becomes easier if the client can provide an image of the life of the deceased. But how many can say they know everything in their parents’ past? Sean can’t. He just doesn’t know it.

Pacing is admirable, even as Summers very slowly gravitates from psychological mystery to clues leading to supernatural possession. The author successfully introduces characters while never straying far from tension. That said, even though readers are informed that Kira realizes she is having a bad dream, I’m not at all sure that I would continue painting if I had the same sort of nightmare.

For example: “Slowly, moving in unison, they all turned to face her and shock turned to horror as she recognized severed heads were encased in the glass, each face frozen in the terror of its demise, eyes wide and mouths rigid in a final mortal scream.”

Well heck, of course she does. And this was just an early dream about working with ash. Nevertheless, Kira continues and, for a while, clients are pleasantly stunned by Kira’s ability to take events and images from family history and immortalize them on canvas. The love story shared by Kira and Sean is charming, in no small way because of her fondness for experiencing her favorite things in a new way through his eyes. Summers writes about New Orleans and farm life with a believability hinting that he may have experienced both.

Sean also has a gift that might clear him for the X-Men minor leagues, but nothing that scares Kira away. Keeping spoilers to myself, I’ll just say that Sean’s gift comes in handy, both in Louisiana and Kansas, as he tries to keep Kira safe. And it will suffice to say that those who do get a giant kick out of “Dark Canvas,” as I did, are going to love the last paragraph.

(In thanks for a friend sending a copy of DARK CANVAS) "And the book! I started it Saturday and finished it Sunday. I can honestly say it's been the first book I've read in a long time that I grudgingly put down when I had to go do something else. I enjoyed it so much. 🙂

"I'm definitely going to buy his next book." 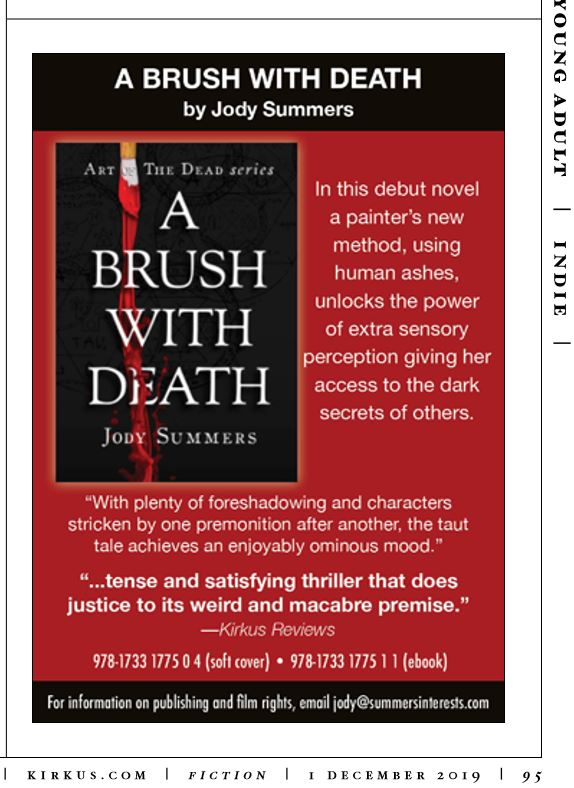 Synopsis: It all started innocently enough when New Orleans painter Kira McGovern mixed some of her mother's cremated ashes into her oil paints. Entering an altered state, she channeled key moments of her mother's life into a breathtaking memorial work of art. Her new business, Canvas of Life, was begun, and commissions rolled in.

But things get strange when Kira meets Sean Easton, a Midwestern rancher, hiding a secret of his own. Both are unprepared for the horrific terrors that emerge with every brush stroke from an unexpected new commission. Even as the pair fall for each other, the evil in the painting grows more malevolent. Soon, the awakened entity isn't satisfied to just flood Kira's dreams with blood and murder. It wants her as its next victim.

Can Kira and Sean unmask the horror (and stop Kira becoming its next possession) before it's too late?

Critique: With a unique storyline about an evil presence longing to commit murder and an artist's canvas that becomes its portal into the human world, author Jody Summers' new novel, "A Brush with Death" is a deftly crafted and page-turning thriller blending of romance and the supernatural. While especially recommended for community library collections, it should be noted for personal reading lists that "A Brush with Death" is also readily available in a digital book format (Kindle, $2.99).

Author of the Novel Paranoia

In Dark Canvas, Sean Easton – an innocent, if not naïve, farm boy - is drawn to Kira McGovern – a world-wise, ex-model who has started an innovative business venture in which she creates memorial paintings from people’s cremated remains. Kira soon begins to experience visions from the people she is memorializing – visions that start out horrifying, but ultimately teeter on the verge of deadly.

As Kira McGovern paints astoundingly vivid pictures with her brush, so does Summers create an astoundingly vivid story with his pen. The reader can practically see New Orleans and the Easton ranch – the two locations at which the majority of the story takes place. Though I felt the love story between Sean and Kira could have been handled more subtly, they, as well as all of the characters in Dark Canvas, were both three-dimensional and sympathetic.

With Dark Canvas, the more I read, the more I felt drawn into the story. I found myself hungrily turning pages as the action peaked, trying to find out what the answers would be. Summers leaves you enough clues to solve some of the mysteries on your own, but just when you think you’ve got it all figured out, he throws in another twist. In the end, Dark Canvas turns out to be a frightening and entertaining ride that could be a solid launch for Jody Summers’ writing career.

Jody, I have been meaning to come here and let you know I read Dark Canvas. What a fabulous read--I thoroughly enjoyed the uniqueness of your book & the beautiful and unusual relationship between Kira and Shawn. It is definitely a romantic thriller. I'm so glad I read your bio info prior to reading the book. I could see how you chose the places these two lived & how it helped with the writing of the New Orleans settings & the restaurants. Having lived near New Orleans for the first 38 yrs of my life, I could visualize some of these places as I read . With your descriptive writing, I was able to step right into Kira's experiences as she was painting. Thanks for posting about your book here--I am so glad I read it and am looking forward to reading The Mask Maker. The Note From Christ sounds like it's going to be a good one as well. How have your book signings been going? I know you will be at NBAA, but are you planning any Florida book signings? Wishing you great success with your writing and book sales.

Jody, I’m still only about a third of the way through, but the thought I wanted to share : I thought from the first few pages that the story is so unique (what I know of it so far)… the painting with human ashes, and the fact that it came from a real life experience of yours with the girl you dated... I simply thought from the beginning “This is unique enough that if it’s a well written, interesting story, I could see it being featured on an Oprah, etc.” And, as I get into it, it does seem well written and really holds my attention. As an aside, my wife Michelle and I were out with some friends the other night, and as I am wont to do, I enjoyed several martinis. J We got home and I turned on the reading light as we climbed into bed, and she commented something like “Uhh.. you can’t read a book, there, buddy. You’ve had a few drinks.” I replied “but I want to know what happens next!” Ultimately, she was right, but it really is an interesting, unique read for a novel! I generally don’t do novels (my motto is sort of, “Don’t tell me a story. I liked stories when I was 10. Make me think.” Your book is cool in that it does that for me). Good luck with everything.

Hi Jody I read John's copy and THOROUGHLY enjoyed it, still want to get my own copy!
Cannot wait to get your next book (no pressure eh)

The nurse that I work with bought your book and she LOVES it!! She said it was right up there with a favorite author of hers. (Sorry I don't recall the name). She said she can't put it down and she loves the short chapters. YEAH for JODY!!!! Keep up the good work.
(Turns out the author she was comparing to was Stephanie Meyers)

Hi! Just a note: Bought the Jody Summers book "Dark Canvas". Loved it!! Will be following up with the sequels ASAP. Many thanks for the tip.

Hey Jody
I just wanted to let you know that I finished Dark Canvas in two days! I think you have a great future ahead of you and look forward to The Mask Maker.

Ok...your book made me so "home-sick" for NO, we are going down Thursday. Taking cooking class Fri and have plans to eat at Commander's Palace, MiLA and GW Fins. I should be the size of a small whale when we return but hey, that's whay exercise is for...right? Loved your book. When is the next one coming out?